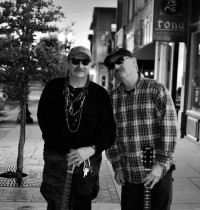 When your legs start burning from a day of powder laps, head into the Powder Keg to enjoy live music from 3pm - 6pm!
Enjoy our signature Powder Keg Wings, the best ramen in town, and beer on tap.

During the Summer of 2014, Cody Spruill, Mike Albee, and Steve Poole, longtime friends who have collaborated in multiple projects over the last 20 years were jamming together as a 3 piece lineup of Soulrise, blending Reggae/Rock with Punk and Ska when they invited Ken Collins and his wife Katie to come to a rehearsal and fill in on vocals. The session was magical and Ken and Katie joined the band, and a month later they introduced the new lineup to the good people of Ogden at the Ogden Fall Equinox festival. Since then they have played multiple music festivals and shows regionally. In 2016 they went into Man Vs. Music studios to work with Micheal Sasich and record the Unity album, it was officially released Sep. 16, 2016 and the release party was held during the Ogden Fall EQ Festival. Currently they are playing regionally and working on material for a followup release to Unity.